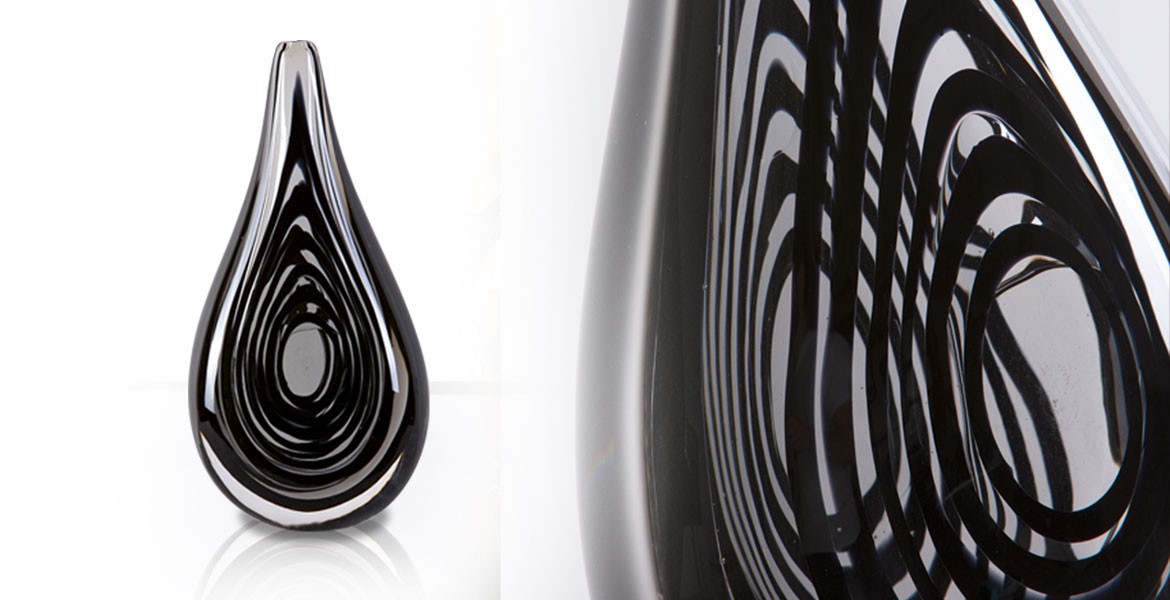 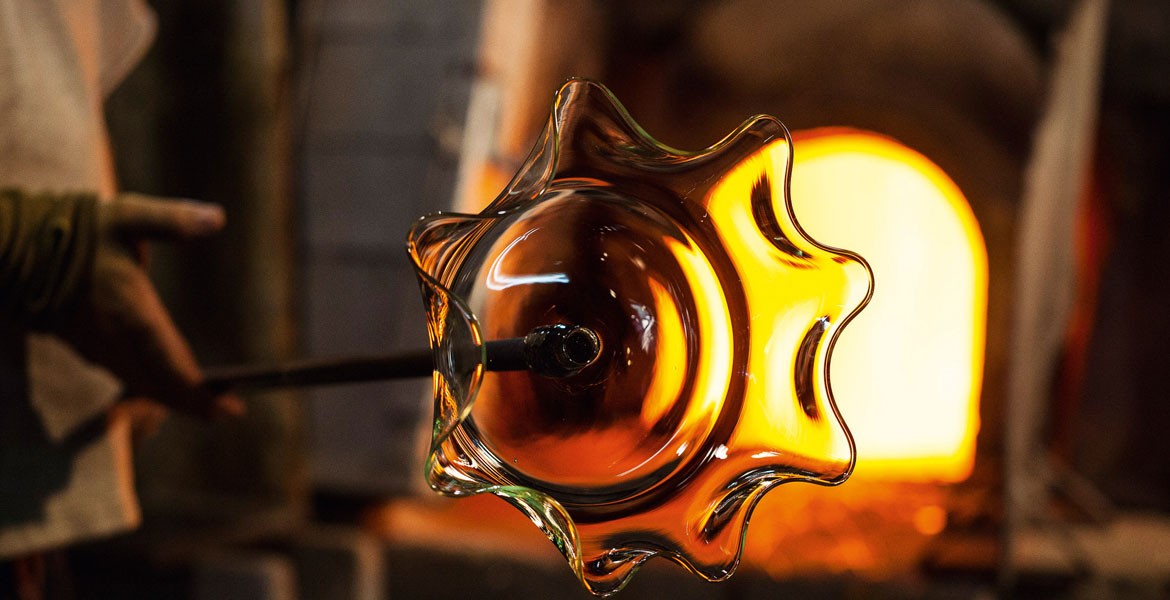 The Seguso company, history and family were featured in the January 29th edition of SETTE, a news, political and lifestyle magazine, supplemented weekly in the Italian national newspaper, Corriere dell Serra. Below is the English translation of the article:

Murano. The maestri who create works of art in a breath

Seguso Vetri d’Arte in Murano, today in Campiello San Maffio, on the other side of the canal there is the ancient church of Santi Maria e Donato, the Cathedral of the island, an important example from the Romanesque lagoon. Next to the furnace stands a tower. It seems incongruous: no use in glass processing. Used historically from the 1800’s, many years before the prize-winning Murano glass production takes up residence there. Instead of glass, here were treated metals to manufacture small bullets. Created by bringing the melted metal to the top of the tower, and dripping from the crucible down to the siphon. During the fall, the lead cooled taking the desired spherical shape.

Seldom does the logic within which a factory works change so radically. Because today the factory is in the adjacent building, yes, it has always been a factory, but a factory where the force of gravity counts for little, the delicate and marvelous glass now manufactured instead of bullets actually seems to defy it, where it is no longer the ‘chemical element of atomic number 82, with a melting point of 327.5 degrees Celsius, which is the lead, but the silica, a compound which melts at temperatures much higher, around 1700 degrees Celsius. And, together, the silica – essentially sand – now comes into play along with a host of other components. Those that are used to create the infinite catalog of Muranese color productions. The ‘Libro of Partie’, is what you call the book of color recipes that every great family of glassmakers keeps as a closely guarded secret (for example, in the case of Seguso, among several other secret colors, is the verde nord, introduced in 1938, whose transparencies of color evoke cold marine depths).

Not that they are always the same. Attention to health concerns has made some disappear. For example, selenium and arsenic, which served to make very good reds, yellows and oranges. Today, to get to those results, or at least near, we resort to a Chinese substance, fairly unstable. The yellow uranium, however, is no longer made.

Workshop chic. Now, it should be added that Seguso, with its dark places, the hot ovens and substances still fluid and iridescent taking solid form under the expert hands of the “glass masters”, the workshop is also the most chic of the world, as decoration, hanging from the high ceiling, a dozen chandelier products: fantastic creations multicolored and multi-formed.

But maybe it’s time to go back. We are talking back to six centuries, because now the Seguso glass family is in the twenty-third generation. The family arrives to these parts probably already with knowledge in the art that will make them famous. The origins, in fact, go back to Susa and then to Altar, in Liguria, where there existed a glassmaking tradition that the Benedictine monks had imported from France. In the papers preserved in the archives of what was once the Serenissima, the first occurrence of a Seguso dates back to 1397 and covers the transfer of ownership of land in Murano. It had been just over a hundred years since all glassworks had been moved from Venice (where they had caused too many disastrous fires) to Murano “an island within an island”, more controllable, more, then, it was occupied only by fields, farmers and convents. Thus was born what, in fact, can be considered the first industrial district in the world. Perhaps, the first Seguso furnace identified by name was in 1600.

“Rulli”, the glass discs, also called “patere” that make up the windows are made here. And then also the first decorative items such as cups, glasses and vases, beautiful examples of which can be admired in the gallery arranged today next to the furnace.

In various documents of the Venetian Republic, Segusos occur as glassmakers before that, in 1605, is created the public register of craftsmanship families, the Golden Book of Murano (the one that, among other things, grants license to its members, not part of the aristocracy, to marry a noblewoman). And, in 1792, in one of the last acts of a Venetian Doge, the Osella medallion is granted to the Seguso family, an honor, which is bestowed every December to a select few of the eminent personalities of the Venetian Republic.

A family memory from the Napoleonic era is recalled, when an admiral of the Emperor Napoleon meets the Seguso family with a proposal: “We were offered noble titles in exchange for ships we had for our businesses. We refused,” says Gianluca Seguso. The subsequent arrival of the Austrians in and around Venice, after the Treaty of Campoformio, offers fewer occasions like that. It coincides; in fact, with a general decline in Murano glassworks (which benefits the production of Bohemian glass) this decline lasts until after the mid-nineteenth century.

To detect signs of revival, we must wait until 1867, with the creation of C.V.M. (Compagnia Venezia Murano) at the hands Antonio Salviati, through which soon is linked Antonio Seguso (who ten years later will gain the majority of the company) and Giovanni Barovier.

It is the season which fascinates many Anglo-Saxon travelers (or residents) whom are also soon transformed into passionate collectors of Murano glass, as Isabella Stewart Gardner, Katherine de Kay Bronson or Sir Henry Austen Layard (all characters, by the way, friends or acquaintances of Henry James and, ideal to be included in some of his work). In the art world the avant-garde is born. In Italy, the futurists are rampant but the glass is not interested much. Murano remains more linked to movements such as Art Deco. Everything fades into the background with the Great War. In the lagoon, the activity of the furnaces is suspended when, in 1917, the Austrian advance threatens Venice. At the resumption in 1919, the cards are mixed again. The Barovier’s liquidate their old company, la Artisti Barovier, and create another together with several partners, all renowned glass masters including Antonio Seguso (great-grandfather of the current owners). In the early 1930’s – after the great economic crisis, which severely affects this sector – the Seguso family takes control and changes the name to Seguso Vetri d’Arte. The complex history of the glassworks is carefully reconstructed by Marc Heiremans in an impressive volume (Seguso Vetri d’Arte; published Arnoldsche). We need only to briefly summarize them considering that equally complex is the fate of the rich and important corporate archives, a key player in the history of Murano glass: remained largely intact until the early 90’s, when it was then divided, in part donated to the Cini Foundation, for another share (which can still cover chronologically all production signed Seguso) now reacquired by the heirs of the twenty-third generation. Next to the figures of the family, is not to be neglected the importance of Flavio Poli, Venetian born in 1912, who comes into contact with Seguso in 1934 and will, for thirty years, serve as artistic director, designer and also a partner of the company.

On the production side, the Seguso family proudly proceeds on the road of research, creating, through the hands of Archimede, the “vetro massiccio “, (solid glass) and perfecting, with Angelo, the technique of “sommerso” (layers of glass superimposed in contrasting colors) that won the Compasso d’Oro award in 1954. The catalog of products, then as now, is endless and with a distinctive feature compared to other brands of Murano. “For us, design is at the service of the material. Elsewhere, it is the opposite,” says Gianluca, President and CEO.

There is however an extended time – from the 1970’s to the beginning of the new millennium – in which the heart of the production of Seguso Vetri d’Arte is separated from family members, but another branch of the business remains. It will take long and laborious steps to arrive to the present. Seguso Vetri d’Arte is now led by brothers Gianluca and Pierpaolo, together with American partners, and Gianandrea and MariaGiulia (all the children of Giampaolo and grandchildren of Archimede): between 2009 and 2013, under this brand they have also joined Seguso, and Seguso Interiors, giving new force to a centuries old fame that now internationally spans all forms of use of glass for furnishings and decoration. This is the case of the glass door handles for the boutiques of Dior and Fendi, in keeping, moreover, with the tradition that had brought Seguso to furnish the interior lighting of the Andrea Doria (now, however, it is the Four Seasons Hotel in Dubai) or street lamps along the streets of Lido (for which the restoration of was recently started …).

In the furnace the maestri continue to handle their “canne de soffio“, the perforated iron pipes that pick up glass from the oven, they blow and it is formed, by hand or with molds, antique instruments, unchanged and strictly personal, these pipes, as the “bardella“, the wooden axle that the master ties to the thigh to support his tools, the “tagianti” what they call the scissors of various shapes, or the “borsella“, tweezers that are used for cutting and decoration: “Glass, however, will never be considered ‘old’ because its value is in the transmission of light, with a variety equal to that of the sunsets,” says Giampaolo, the father, from his studio above the furnace where he still develops imaginative creations.